The seventh Van Halen studio album and first without (Diamond) David Lee Roth, 5150 marks its territory as the beginning of the Sammy Hagar era of Van Halen. Previously known for its party god rock sound, 5150 displays a shift toward love songs and ballads, with the lyrics chart reading a bit more on the chick-friendly side.

The argument would a whole other ballgame if Van Halen had brought Patty Smyth (Scandal) into the band instead of Sammy Hagar.

Also, very rare for all members of a hair metal band to receive credit for writing the album. 5150 shipped 5 singles: Best of Both Worlds, Dreams, Love Walks In, Summer Nights, and Why Can't This Be Love.

Riffing on Greek Mythology, the album cover features a bodybuilder hoisting Planet Van Halen, as depicted by the Van Halen symbol, in the image of Atlas, only with a Flavor Flav-esque "5150" chain. Dan Chapman's illustration is stand up, you know, despite the kneeling.

The genius of 5150 is that it was obviously an album with a lot of material written for DLR. But you take those great songs, then add in Hagar's unbridled earnest sensibilities, and this was a monster album!

If anyone can speak to rippin' guitar work, it's Bryn Bennett of Bang Camaro. We have to agree with his assessment.

It is a police code in California for an involuntary 72-hour hold in a psychiatric facility, for mental evaluation. Speaking of Flavor Flav, many people forget that Easy-E dropped a debut EP by the name 5150: Home 4 tha Sick. But, we all remember the police code for Van Halen's album ... right?

No one in the biz does the short Whoa/wow to confirm the next vocal line like Sammy Hagar. Only eagles fly as high as his voice.

The rhythm section of Michael Anthony and Alex Van Halen are as strong as they have ever been.

Love the whistle to the waitress. A rack of what?!

What's she good enough to?!

Why Can't This Be Love

Love the bass intro. Where would Van Halen be without Michael Anthony.

Nothing like a singer singing along with the guitar line.

Why Can't This Be Love is a great VH tune.

From VHND, "Why Can't This Be Love was an instant hit, rising to Number Two on the US chart. 5150 itself was released on March 24. It was an out-of the-box success. "The album went platinum in one week," Hagar says. "It was the fastest million-selling record in Warners' history.""

That's great and all, but the album isn't even close to 1984 or For Unlawful Carnal Knowledge. I guess it's a starting point for the Hagar era in the band. The tunes are great, don't get me wrong. And maybe we expect more from a Van Halen album. But at the end of the day, it is playing at an almost all-star level when other VH albums were winning MVPs.

Kind of sounds a bit like the music that Marty McFly wakes George up to in the past. You know, Darth Vader from Planet Vulcan.

Get Up got a Hot For Teacher drums thing going on.

Wedged in between the smoother Why Can't This Be Love and Dreams, Get Up possesses a bit more early VH grit.

Anthemic. Super synth heavy. DLR could not have pulled off Dreams vocally.

Get higher and higher!

Plus, the video was basically one big America promo.

Check out the A4 Skyhawks making their moves with Van Halen layered over it. Ain't nuthin' more 'Mmmerrika than that, ever.

Eddie leading off doing his trademark thing. King of vocal emphasis, Sammy Hagar follows up with a trademark "uh".

Summer Nights has a sleaze rock, divey blues approach that somehow maintains a squeaky clean image, like a bad boy in a suit that hides his tats whose girlfriend's father is impressed by.

Best of Both Worlds

I don't know if enough people comment on Eddie's clean tone. I've always dug it. I mean, I'm sure there are thousands of websites dedicated to it. I just think it's underrated.

Best of Both Worlds is a fantastic VH tune.

On an album full of piano, keys, and synth, Love Walks In really ups the ante by really pulling Eddie's virtuoso guitar work back behind the scenes.

Do people ever talk about Hagar's guitar playing? Love the single pickup guitar in the Love Walks In video.

"And then you sense a change, nothing feels the same, all your dreams are strange, love comes walking in."

Love literally walked in the door in the form of the Red Rocker. And Van Halen was never the same.

To quote Ox, of Bill and Ted's Excellent Adventure, "Everything is different, but the same ... things are more moderner"

Ok, Eddie is back. 5150 is hair metal music, from the intro to the outro. Even the solo feels more attuned to traditional hair metal, though it features the standard EVH technique and tricks.

If you told me Paul Gilbert (Mr. Big) slipped into the studio and wrote and recorded 5150, I would completely believe you. In fact, Mr. Big singer Eric Martin was ALSO considered for Van Halen vocal duties. Fun fact. Dude has PIPES.

Everyone needs to shut up, Michael Anthony's bass is talking.

Inside seems more Chickenfoot goofing around than Van Halen. Inside is also what happens when you are a platinum selling band with luminary talent who is just trying to wrap up their seventh album.

The Van Halen News Desk has a great article "I Want Some Action", an unreleased tune from the 5150 recording sessions. In fact, it is the only unreleased track from the Hagar years.

"[I Want Some Action] ... is a song that was written and recorded during the "5150" sessions, and, interestingly, the only unreleased song that has leaked out of 5150 from all the years with Sammy Hagar as vocalist."

Thinking more on this release ... maybe the whole album, lyrically, is allegorical for the changing of the guard in Van Halen. On track 3, Sammy urges you to, "Get up and make it work". Love Walks In speaks of change. Dreams speaks of ... 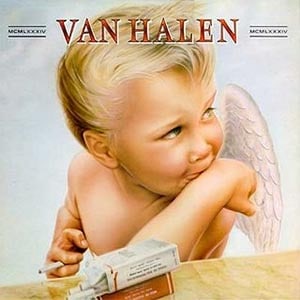 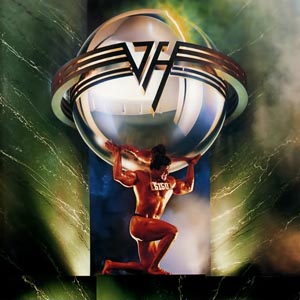 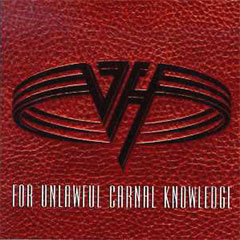