We can't get enough of the hits that Hair Nation plays, hits such as Def Leppard's Photograph, Bon Jovi's Wanted Dead or Alive, and Whitesnake's In The Still Of The Night.

SiriusXM bills the channel as a station that plays the music of '80s Hair Bands. Here's what they have to say, "Cruise the Sunset Strip with music from the hard rock masters of the '80s. Big hair, big guitars. Put your spandex on and feel the noise from Motley Crue, Poison, Skid Row, Bon Jovi and more."

The Hair Nation playlist consists of the most excellent music of all-time - aka - zero Butt Rock. It's a 24-hour rock party fueled by the hits of Def Leppard and Guns N' Roses, to name a couple.

It would be incredibly hard to pin down a Top 50 or Top 100 songs that Hair Nation plays, mostly because we aren't sure how you would qualify such a playlist. You could take the standard route and choose from the best hair metal songs and craft a Top 50 from there. You could also analyze the station's overall playlists to find out which are the Top 100 songs that get broadcast. You could also ask the hosts to put together their own lists and pull a Top 50 from there. It's entirely up to you.

Hair Nation stays away from modern acts that are hair metal inspired. They also don't play songs from bands such as Steel Panther or Crazy Lixx, as both are bit too modern. So, you won't catch Michael Starr, Satchel, Stix, or Lexxi Foxx on channel 39 any time soon.

Hosts take 6 hour blocks and crank out the hits non-stop.

Dangerous Darren hosts from Los Angeles, the home of the infamous, Sunset Strip. He's also a regular at at rock shows. Listen to Sirius XM to hear his adventures from backstage and touring with some of the world's top acts.

Industry stalwart, Eddie Trunk, has been key cog of the metal machine for nearly four decades. Ex host of VH1's, That Metal Show, Eddie has also managed artists, spearheaded parts of a label, and launched the first ever rock/metal show in the early 80s. He's definitely on the genre's who's who list.

Keith Roth has been a rock musician for more than 20 years. He has played on more than 50 albums and produced, played, and toured with many big-name rock 'n' roll acts. Now, he shares his stories with you on Hair Nation.

Luc Carl spent his twenties working as a bartender, DJ, and manager at some of New York City's most popular rock 'n' roll clubs. He's an internationally published author, a drummer in 43 bands you've never heard of, and a full-time nomad. You can catch him riding his motorcycle throughout North America when he's not on the airwaves.

It's well-known that Tommy sings and hangs out on the Lower East Side in New York City. As a lead singer, he has opened for a lot of the biggest names in the world of rock.

Back in 2018, SiriusXM put together a rock tour that was hosted by channel host, Eddie Trunk. Trunk Nation, his show on the SiriusXM channel, invited Jack Russell’s Great White, BulletBoys and Enuff Z’Nuff, three fantastic Cock Rock bands, to go out and play in 21 cities around the United States, with the most common venue being a House of Blues in its respective city. 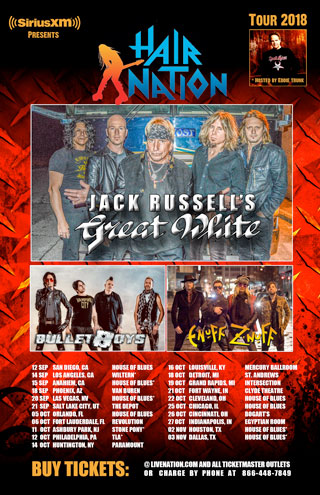 A weekend of Poison, Whitesnake, and all matters of delicious glam metal, hosted by owl-level screeching vocalist, Mark Slaughter, lead singer of the eponymously named, Slaughter. Amongst the studio tracks were a bunch of live cuts from all of your favorite hair bands. The virtual festival, created due to the pandemic, was also available on the SiriusXM app.

What Channel is Hair Nation on Sirius XM radio?

Hair Nation is on Channel 39.

How do you request a song on Hair Nation?

What band is Keith Roth in?