The Best Tesla Songs of All-Time

With hits like Love Song, The Way It Is, Modern Day Cowboy, and Edison's Medicine, Tesla has carved out a solid career in rock & roll.

Tesla could rip when it wanted to. They could also pen a ballad. The twin guitar attack of Hannon and Skeoch was always rock solid. Keith's vocals had power. Luccketta and Wheat were tight.

Anyway, the most important Tesla songs came from the most important albums, including their debut album, Mechanical Resonance, and the follow up, The Great Radio Controversy. Psychotic Supper and Bust a Nut had some solid tunes as well. And we shouldn't discount the live album, Five Man Acoustical Jam. After all, the cover of Signs might just be their most famous performance.

The band gets lumped into the hair metal category, but isn't really as Aquanet-fueled as the rest of them. That said, of course they're songs are featured on hair nation. Tesla's songs and charged live performances earned the band, and Geffen Records, three platinum albums. Here are some of the very best of them. 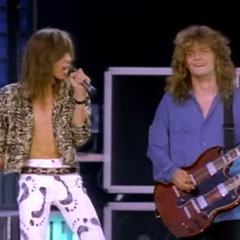 Love Song really had it all. The acoustic intro is world class. The lyrics hold up. The solo had nuance. The chorus was very singable. The outro let the song run out in style. Love Song is Tesla's very best song.

One of Tesla's best rock songs, Modern Day Cowboy explodes off Mechanical Resonance. Shares some tonality with early Def Leppard, think High 'n' Dry. Keith and the crew are ready for the big showdown with an arsenal of heavy licks and riffs.

Jeff Keith and the boys are always ready to kick ass, as they brought a slide to the guitar fight. The video is filmed in a variety of tough locations, like a big tunnel that's just beyond the rebar and fire. Just because.

If Heaven's Trail ever came across a group of Butt Rock bands, it would kick their asses.

Tesla's Paradise is a phenomenal tune. How do you know? Because it sounds equally fantastic electric as well as fully acoustic (below). Just listen to the album version of Paradise, it slays.

Rawk! Dual guitar shredded wheat all over the Hang Tough cereal bowl. 100% swear that's not a Brian Wheat pun. We almost feel remiss ranking it 5th, but the 4 songs above it are really excellent. Hang tough was a total stadium shaker in the touring with Diamond Dave days.

Edison's Medicine, like their band name and album titles, keeps in line thematically. It was good to see the band keep their amps overdriven on the follow up to The Great Radio Controversy. Most bands go lighter as they follow up their success. Some, like Jersey's Skid Row went harder on their next album, as was the case with 1991's Slave to the Grind.

The Tesla train just kept plowing down the same tracks. We attribute this to their rock-roots-driven attitude and their arms length distance to the Sunset Strip. Don't take us wrong, the boys of Tesla could party just like every other band, they just didn't need a can of hairspray per man to do it.

Song and Emotion was written for fellow 80s rocker, Steve Clark (Def Leppard), who passed away in early 1991 from alcohol poisoning. The boys in Tesla got to know Steve and the rest of the Def Leppard crew when they opened for them on the Hysteria tour.

Tesla's tribute to the 1970s in 1991. What You Give is the tenth track off Psychotic Supper and gives the album some back end gravity. You'd be forgiven for thinking this song was a Shake Your Money Maker b-side.

Jeff Keith believes What You Give is good enough for the girls that Tesla runs around with. We believe so, too.

Gotta write the song for the babes. Can't just throw heavy metal thunder at them track after track and expect them to keep showing up to the shows. The Way It Is is for the ladies.

Yesterdaze Gone deserves to be on any ranking of top Tesla songs. Power chugging chords that support moving on from yesterday's girl. Hannon and Skeoch bottle up some harmonized lightning for our delicate ears.

Tesla's acoustic cover of Signs was big big big on the airwaves of rock radio stations in 1990 & 1991. Originally released off the album, Good-byes and Butterflies in May of 1971 by Canada's Five Man Electrical Band, Tesla brought it back to the attention of Americans and Canadians in the same way that Wayne's World brought Bohemian Rhapsody back at the same time.

Signs is just a great tune. The original version has a great jam intro.

Little Suzi was originally written and performed by a few ex Jeff Beck Group Brits, Ph.D.. Tesla made it famous here in the good ol' US of A. Little Suzi loves to smile for the camera. Probably cause the music makes her feel so hot.

Little Suzi's On The Up!