Skid Row Slave to the Grind

Like a defeated boss who comes back in any 80s/90s video game, Skid Row came back as Super Skid Row on Slave to the Grind, with new attacks and waaaaaaaay more Hit Points!

Slave to the Grind Track Listing

The boys from New Jersey go harder, get tougher, and kick more ass on their second studio album, Slave to the Grind. Even the ballads are lavishly dark.

Only, the didn't die. At least not yet.

Jersey cohorts, Bon Jovi, were consistently looking to go lighter, as evidenced by 1992's Keep the Faith. Not Jovi's Garden State counterparts, Skid Row. Nah, Snake, Rachel, Dave, Sebastian, and Scotti were gathering up their chains and billy clubs for an aural beatdown.

Bolan and Sabo gain the lion's share of the writing credits, and thus the hero's portion at the evening Meadhall.

Slave to the Grind song notes

The song that convinced the Broadway producers of Jekyll & Hyde that Bach could pull off the title role.

Monkey Business! Slippin' on the track! Baz is riding the Nightrain again. Probably with Duff on the Use Your Illusion tour.

Not to be confused with Danger Danger's more jocular, lady-focused Monkey Business, which appeared on their second album, Screw It!.

Skid Row goes three and a half minutes in the rock ring on this one.

Ominous lyrics. Skid Row lead singer Sebastian Bach opines, "I won't be the one left behind", yet, that's exactly what happened when he was fired from the band in 1996.

The real threat is pissing off Skid Row, cause they're already pretty damn pissed.

Overdriven, machine-gun riffs were made for Sebastian to let loose over. Affuso and Bolan thump, bump, smash, and crash. The Snake Sabo led change of pace at 1:36 is quite unexpected. All hell breaks loose at 2:31.

Get the Fuck Out

Was Get the Fuck Out a tune that got cut from their self-titled debut? Subtle as it may be, well, certainly not the title of the song or its message, there is a difference in tonality from the rest of the second album. More of a rebellious anthem that aligns with early Skid Row/Youth Gone Wild, than the abrasive, take-no-shit middle finger that is Slave to the Grind.

I ended up with the clean version tape because of BMG. As if I wasn't sneaking into R-rated movies underage. I begged for the explicit and BMG let me down.

All the way to Beggar's Day!

Livin' on a Chain Gang

In a Darkened Room

Is that a Jane's Addiction t-shirt?!

Riot Act is all over the sonic map. The second half of Slave to the Grind eases back into the hair metal cockpit.

Bolan's growling bass. Snake and Scotti's harmonized melodies. Affuso pounding away. Two things being kicked on Mudkicker, and mud is the other one.

Pants might hate me for saying this, but Wasted Time is my favorite track on the entire album. I can't listen to it without hearing Sebastian Bach go through every single emotion in human history. This is how you slow close an album.

More Slave to the Grind Details 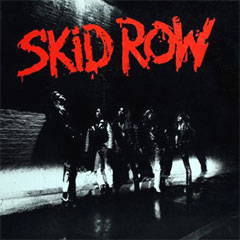 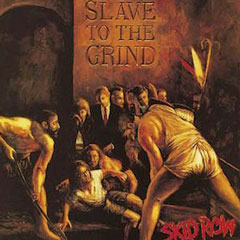