Guns N' Roses entered the scene and dropped Appetite for Destruction at the apex of 80’s metal excess which meant both dominating the scene at the height of its popularity while simultaneously sounding the death knell. It’s timing was nailing the proverbial prom queen only to find out you impregnated her and your offspring entered this world in flannel diapers while crying in drop d.

The Sunset Strip (Hollywood) was never the same after 1987's Appetite for Destruction. Guns N’ Roses debut album welcomed everyone to the jungle.

Appetite for Destruction is a legendary rock album, producing an unheard of 7 singles.

Regardless of what happened over the next few years, July 12, 1987 is the day hard-rock/glam/hair-metal (whatever you want to call it) went through puberty, had its balls drop and grew the fuck up. Sex, drugs, and rock and roll, and Hollywood for that matter, had never sounded so polished until Appetite for Destruction smacked us across the face, bent us over a table and never called us again. It threw aside a bunch of dudes who looked like ladies (re: Vince Neil of Motley Crue) and replaced them with street-smart punks who packed Gibson’s instead of Maybelline.

The world was not ready for what Appetite for Destruction brought to the world (it would, in fact, take over a year for Appetite to reach #1). Sure, the Metal landscape was littered with plenty of success (and excess) through multi-platinum rock bands like Def Leppard, Poison, Warrant and Skid Row ...but nothing prepared fans for the punch to the gut they were about to receive. This Geffen Records debut album was packed with so much badassery, that future tracks like “November Rain, “You Could be Mine”, “Don't Cry”, and “Back Off Bitch” didn't even make the cut. Better still, "Move to the City" and "You're Crazy" can be found on Lies.

Being of the Vinyl/Cassette era, the album was split into two sides: G-side and R-Side. The “Guns” side dealt with violent debauchery (‘Welcome To The Jungle’, ‘Mr Brownstone”’. “Paradise City” etc) while the ‘Roses’ side focused on love and lust (‘Sweet Child O’ Mine’, ‘Rocket Queen’, “Anything Goes’ etc). Ahhh, the vanities and vagueries rock music.

Welcome to the Jungle

The guitar intro alone let’s you know your about crane-kicked to the face and brought down to your shun n-n-n-n-n-n-n-n knees. And that’s even before we first hear Axl’s crescendoing scowl. Enter stage right the rest of the band and holy fuck we’re off!!!! This is a blistering tune that never relents. Even the bridge, though it pulls back on the gas pedal with it’s trippy mix of Adler’s drums and Slash’s guitar which sounds straight out of Space Mountain, is simply there to quietly remind you that “You’re gonna dieeeeeeee”.

Axl took this Duff McKagan acoustic guitar ditty and gave it some balls despite its Bluesy open-E tuned roots. We also get the first instance of Axl’s “spoken word” style singing (found in other songs like ‘My Michelle’ and ‘Get in the Ring’) that complimented his surprising vocal range. “You think you’re so cool? Why don't you just fuck off”

It's So Easy: and other lies is the title of a Duff McKagan memoir. Fitting.

Holy Bruce Dickinson, drummer Steven Adler loves himself some cowbell. Unheard of in the 80’s era (outside of Def Leppard’s Foolin’), Steven Adler drops some sweet cowbell in 2 of the first 3 tracks. This also marks the first and only time Slash would step aside and let Izzy Stradlin handle a solo..and Izzy crushes it! Granted, Slash might have been 8 bottles (and a whole $10.32) deep of Night Train brown-bagged wine at the time.

Out ta get me

Axl’s paranoid ramblings are the perfect back-drop to this Izzy riffed and Slash slayed tune.

Moving from dollar wine to the slightly more expensive heroin - Brownstone chronicles the bands descent into addiction at the hands of their favorite drug dealer. Metal as they might be - band members Adler and Slash channeled their inner Bo-Diddley (hero to both) for the intro while slash peppered this song with blues-soaked riffs.

Try and listen to this song without tapping out the simple but bitching drum-beat? You can’t - it’s like trying not to mimic Phil Collins epic drum-fill in “In the air tonight”. This song is a happy, loud, sing-along track that stands out from the grungy, dark underbelly of the rest of the first album and gets goofy with some Axl played synth and Duff adding a bouncy bass riff underneath Slash melting faces. By the end of the song though, happiness parts way for controlled chaos as everybody seems to be ripping their own parts but it somehow just works and is epic. Slash proves he’s on another planet here.

Sidenote - the original lyrics that Slash, ever the poet, wanted were “ "Take me down to the Paradise City / Where the girls are fat and they've got big titties". Not sure that would have made it onto MTV.

Just when you think you’re about to get the album’s first ballad...SWEEP THE LEG!!!! Sorry, we love the Karate Kid here at Hair & Flannel. Surprisingly, this is an actual account of the life of a band friend Michelle Young. The song drives at a furious pace and just as quick as it begins, Slash hammers-off right to the end.

Generally credited as a throw-away song, and one rarely played live, this vastly underrated GnR song gives us more cowbell, Izzy riffing and Axl giving us some warm and cozy vocals. This song has a different feel from the rest of the album most likely being due to guitarist Stradlin writing and playing the majority of this song with Axl Rose added some last minute words in the studio. Biggest knock on this song - the weird twangy acoustic guitar coming to the forefront in the middle of the song.

Axl - “What is that riff? Keep playing it!” Slash “I’m just tuning my guitar, calm down” And with that, GnR reluctantly had their greatest hit of all time!

Another song that started at an acoustic ditty before being injected with 8 cc’s of adrenaline and we got the version that made Appetite. It’s frenetic beginning to end and speaks to the bands punk rock roots. A fast fun song

Sex is still the name of the game of R-side of Appetite. “My way, your way, anything goes tonight” is pretty much the mantra of all things GnR. The oldest song in the their library, Anything goes is just quintessential GnR despite never making it into many live shows.

Boy cheats on girl. Girl bangs lead singer in revenge. Lead singer has the whole thing recorded. Sound engineer adds these sex-sounds to the track unbeknownst to the boy in question. Boy gets mad at singer. It’s the love story to ends all love stories. Also, one of the bitchingest tunes on an already highly bitching album. 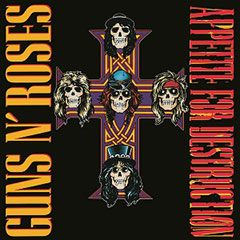 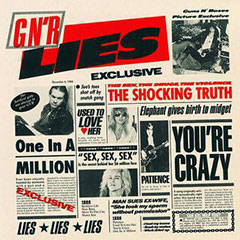