Even though she has a slew of movie and television credits, 80s super babe, Tawny Kitaen, is best known for being the girl on the hood of two Jaguars in the powerhouse 1987 Whitesnake song, Here I Go Again. 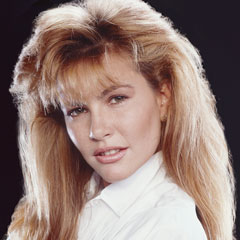 The Queen of Cock Rock videos, she lived a high profile life.

And yes, she appeared in several TV Shows, including Seinfeld, CSI, and Married... with Children, as well as several films, including the 1984 hit, Bachelor Party, starring luminous actor, Tom Hanks - she plays the bride-to-be.

But the real reason everyone knows Tawny, born Julie Kitaen in 1961, is for her world class appearances in five 80s hair metal videos as well as two Ratt album covers.

Let's check them out.

Music videos were how you got noticed, just ask Bobbi Brown, Stephanie Seymour, and Sharise Neil. Heck, even Liv Tyler and Alicia Silverstone if we're being honest.

No video vixen gave a bigger performance than Kitaen in 1987, when she ascended the Two Jaguar throne in the legendary Here I Go Again video. She had some practice though, as the song was actually the third music video she starred in, following 1984's Back for More and 1987's Still of the Night.

Somehow, someway, Milton Berle sneaks into Ratt's Back for More video. 1984 must have been a hell of a year. It was certainly a hell of a Van Halen album.

Anyway, the music video opens to a young Tawny contemplating life to the tune of Crosby's 12-string guitar. The diner isn't metal enough, so Kitaen gets up and gets Ratt's album to play on the jukebox. And wouldn't you know it, the band shows up at the restaurant. Ahh, the 80s.

The dine & dash on a pissed off server, hopping in a convertible Mercedes. Don't worry though, she'll be back with the cops after the other guys in Ratt abscond with two ladies some Corporate Hot Shot was entertaining down at Gardel's. Lean outta those T-Tops, boys.

Safe to say the emphasis wasn't on Tawny Kitaen in the Back for More video. Probably why she moved on up the food chain, from Ratt to Whitesnake.

The music video for Still of the Night represents the first of Tawny's four videos for the band, Whitesnake. The video frames Kitaen as the prey to Whitesnake vocalist, David Coverdale. However, if you consider some of the looks she gives the camera, you may begin to consider that she is the predator.

And yes, 80s metal bands were always considered to be the Alphas in rock videos. But sometimes you just get the feeling that Kitaen's aura was orders of magnitude more powerful than Ratt, Whitesnake, and every other glam hair band out there.

And so fall to the predator and have more Coverdale did, marrying Tawny Kitaen and casting her in the next Whitesnake hit, Here I Go Again, as Still of the Night isn't why we remember her. That doesn't take away from her great performance though.

Honestly, read our Here I Go Again video breakdown to understand why this power ballad is the best video of all-time. It couldn't have happened without Two Jaguars, one black and one white, and the infamous, Tawny Kitaen.

Whitesnake's Is This Love

Oh, Kitaen is pissed and storms out on a fully clothed Coverdale ... in a short white shift. So all is probably well, because she'll be back. We know this because she does the sexy dancing for the rest of the video.

Ok, let's face it, she's already back by 2:45 when the guitar solo starts, as she's physically closer to Coverdale than the second neck on either Neil Murray's Double Neck Headless Bass.

Wait, did the solo piss her off? Now she's angrily tossing what looks like a small, cheap 10-watt guitar amp into the street. And, storming off and looking back over her shoulder - something Coverdale claims to do in The Deeper the Love - when out of nowhere, she's grabbed by a petty street thug ... who happens to be Coverdale. David then proceeds to shake her until he drives her backward ... onto the White Jaguar. Then they make out. Caveman ethics in play.

All is well that ends well though, as the happy couple stroll off in the distance.

Whitesnake's The Deeper the Love

The Deeper the Love features a much, much more blonde Tawny. However, the love couldn't have been deep, as this is the last Whitesnake music video that she appears in. And this makes sense, as Coverdale and Kitaen divorced in 1991.

As for the video itself, Kitaen is getting ogled by Coverdale as she bathes in a tub on the wall. This is after we see her laying on a railingless set of Cinderella stairs - the same stairs that lead guitarist Vai rips the most effortlessly casual and yet bad ass solo ever written.

Is it us, or did they cut to guitar legend Steve Vai quite a bit in the video? Just checking.

Album covers never seemed to have the cachet that music videos did, especially not in the 80s. However, you gotta start somewhere, and so that's where we find Tawny in 1983, on the cover of Ratt's debut EP.

So we're all clear, Ratt threw rats at Tawny when they were shooting the album cover art for the EP. Can't imagine Tawny was pleased with this. But hey, it's for the band!

"It was just some weird idea — 'Get some rats, throw 'em on her legs, it'll be kinda creepy.' So we did," Pearcy says in the book. "And Tawny was a little squeamish but she went with it. She was a trooper!"

Kitaen looks like she's trying to get back into the cellar on the cover of Ratt's 1984 full-length album, Out of the Cellar. Or, maybe she's inviting the boys of Ratt, especially Robbin Crosby, to leave their cellar in the most sultry of ways.

Tawny died on May 7th, 2021 at the age of 59. Dilated Cardiomyopathy, one version of heart disease, was the cause of Kitaen's death. Some medications (and opioids?) may have played into it as well. She passed away in her Newport, California home.

Beyond the music videos mentioned above, Tawny was in Bachelor Party with Tom Hanks (1984), an episode of Seinfeld, and a handful of appearances in smaller credited TV & Reality shows, with one highlight being that she hosted "America's Funniest People" for a spell.

What did Tawny die from?

Dilated Cardiomyopathy was the cause of her death.

When did Tawny Kitaen pass away?